By 1919, at the urging of MFA founder William Hirth, farmers had organized to form some 1,000 farm clubs across Missouri. Many of those grew to become MFA stores and elevators. Along the way, through population changes, economics and the diminishing number of farmers, many of these locations closed or merged with others.

In the months leading up to 2014, MFA’s centennial, we invited FFA students to turn into history sleuths for our MFA History Essay Contest. We asked students to dig deep for the names and important dates that helped build farm clubs and early MFA exchanges.

There were some great submissions, and judges said sorting the top picks was a difficult task. However, the task was met and we can announce the following students as winners of the essay contest:

The History of Tipton MFA
By Clara Knipp
Tipton R-VI High School Tipton FFA Chapter
For a nation whose roots began in an agrarian economy, prospering farmers were a primary cause of growing towns across the nation. In the small central Missouri town of Tipton, that mutual relationship was no different. The May 16, 1919 issue of the Tipton Times, reported that “a better Tipton means an advance in the value of farming lands adjacent to the town...the town and country’s interests are mutual.” The importance of advancing local farms was evident, and many measures were taken to attain those advancements. Better schools and the development of roads are examples of improvements that were made in Tipton. However, one development—the development of farm clubs across the state—was essential to increasing farm productivity. 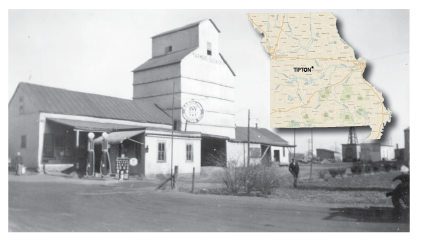 These farm clubs, which would later become a part of MFA, brought farmers’ common interests together with a mission among the members to purchase goods in bulk and receive a fair price while marketing their products.

In a Feb. 14, 1919 article of the Tipton Times, Ben C. Finley sold a grain elevator to his son, A.L. Finley. Two months later, A. L. Finley sold the elevator for a bid of $10,000 to the newly established Farmer’s Elevator Company. Following this transaction, a Tipton Times article pronounced the Farmer’s Elevator Company as “ ...composed of the very best citizens of this community...”

On May 9, 1919, Homer Scott, formerly of California, Mo., was hired as a manager at the elevator. He was described as a knowledgeable and well-respected businessman. Growth was immediate. On June 6, 1919, Pete Dick was employed at the Farmer’s Elevator Company as a manager of the milling department.

Meanwhile, the April 2, 1920 edition of the Tipton Times noted that a stockholder meeting would be held for the Fortuna Elevator in Fortuna, Mo., approximately 6 miles south of Tipton.

In this announcement, W.S. Cook was listed as president and George M. Kliley was secretary. In an effort to gain members and public knowledge about the Fortuna Elevator, the Dec. 17, 1920 Tipton Times reported that farm members would be charged 1.5 percent return on the livestock transported to market, while non­-members would be charged 2 percent. Farmers interested were directed to contact the Fortuna Elevator manager W.S. Cook or contact P.J. Schmidt.

Back in Tipton, A.M. Fry, secretary of the Farmer’s Elevator Company, announced a shareholder meeting in the Dec. 31, 1920 issue of the Tipton Times. In the meeting announcement, the order of business included discussing the Livestock Shipping Association and Poultry Exchange. According to Harold Knipp, regular meetings of farmers eventually began on Saturday afternoons with Carl Knipp serving as president of the board. It is unknown when Carl Knipp assumed this position, but he remained president for 21 years. During this time, a group of farmers would transport livestock to St. Louis, and then bring back fertilizer and other needed supplies to Tipton.

The first audit for the MFA Cooperative Association of Tipton was in 1929. At that time, C.M. Ferguson was manager. In December 1947, John E. Sanders became manager, with Clint Aiken assuming that position in 1949.

On Nov. 22, 1950, H.E. Haldeman became manager of the store. Dan Oligschlaeger replaced Haldeman in March 1963. In 1985, Tipton MFA went bankrupt and was consolidated by the California MFA. In 1989, the local MFA cooperative became managed under state MFA, headquartered in Columbia. The Tipton MFA Agri Services store is currently managed by Roy Knipp.

The organization  of MFA helped farmers become productive businessmen, paving way for the development of rural communities. The growth in the past I 00 years of MFA is evidence that a simple idea and organization of a group of passionate farmers can become something larger. The mission to serve farmers and assist them while marketing agriculture products remains a common goal of MFA. Although the mutual relationship between growing economies and prospering farmers may not be as evident in the eyes of some people, the relationship is very apparent in the eyes of farmers. Hopefully, the long-standing and strong foundation of MFA will help keep this relationship strong for the next 100 years.