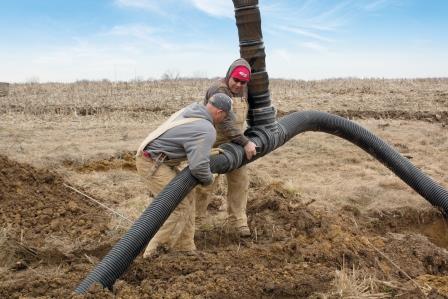 Chris Beach works long hours every fall, installing tiling systems to drain excess water from farm fields with clay-pan soils that are common near his home in Novelty, Mo.

Annual rainfall in this corner of the state can hit 40 to 50 inches, and the area’s clay soil can trap moisture and reduce yields. Few thought tiling could work on these prairies, but that changed 10 years ago when the University of Missouri’s Greenley Research Center in Novelty installed a successful tiling system.

Tiling—also called subsurface drainage piping—involves digging a trench with a special plow or trencher and burying black corrugated plastic tubing 28 to 48 inches under the surface, from 20 to 100 feet apart depending on the soil type. The tubes drain excess water into a main trunk line and eventually into the lowest corner of the field where it runs off into a waterway or stream.

In 2010, Beach and Brad Koch created a new business, Precision Tiling LLC, drawing on their backgrounds as seed salesmen. “It’s been going real well,” Beach said. “Every year we get a little more interest, and repeat customers want tile in more fields.”

The area’s clay soil requires piping to be installed closer together than with other soil types, making tiling more expensive here. Chris estimates that for a 20-foot spacing using three-inch tile, he might charge up to $1,250 per acre. Kelly Nelson, research agronomist and professor at MU’s Greenley Research Center, said costs range from $600 to $1,500 an acre depending on the soil type and location.

Tiling gained popularity as corn and soybean prices—and land prices—boomed. “Ten years ago you could buy good ground around here for $3,000 an acre,” Beach said. “Now it’s double that. Farmers are asking, ‘How can I get more return on acres I already own?’”

Increased planting windows. Tiling leads to drier ground when it comes time to plant in the spring. You can get in the field earlier, and you won’t have to replant as many areas. This becomes important as farm sizes grow and farmers squeeze more acres into their planting window. Recent wet springs have further narrowed the window. Dry fields also facilitate timely harvests.

Increased yields. The ability to plant earlier usually leads to higher yields. Roots reach deeper when soil isn’t saturated, which also boosts yields. Beach estimates that farmers in his area earn a return on investment in 10 to 12 years.

More efficient use of nutrients. USDA information on tiling indicates that tiling can result in some leaching, especially of nitrates that can cause hypoxia in waterways. Beach and Nelson believe tiling can reduce nutrient runoff. “Most chemicals are sprayed on top of the ground, and tiling allows moisture to run off more slowly, which reduces surface runoff,” Beach said. “Drainage water management systems have reduced phosphorous loss by 80 percent, while nitrate-N loss was reduced up to 85 percent,” Nelson reported.

Once a farmer expresses an interest in tiling, Beach takes these steps.

Beach says installation works best with a team of five people. He tries to get the work done after harvest and while the sun shines—usually in the fall. While he installs in winter and spring, his equipment can’t handle deep frost and heavy mud.

Nelson and Beach both report that more farmers are buying their own tiling plows and installing tiling themselves, and many are making it work. In fact, MFA AgriServices locations now sell tiling plows.

Nelson has taught classes with Missouri Land Improvement Contractors of America and NRCS engineers, and he says it takes a few days for participants to understand subsurface drainage system design. “Some farmers start on their own soils and are then asked to do a neighbor’s field, while others prefer a trained contractor,” he said. “It’s a fairly complex process.”