Journey to the top 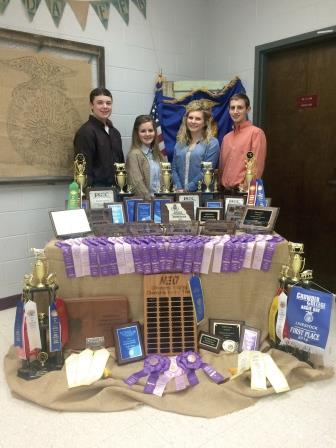 They started at a young age. Since they were eight years old, Payton Dahmer, Cara Comstock, Kaylee Farmer and Skyler Scotten have competed together. Ten years later, the members of Nevada’s FFA livestock judging team are international champions.

“We’ve been judging together for so long. We’ve learned how to work together as a team,” said Nevada senior Kaylee Farmer.

The journey started the spring of 2014 with Coach Brian Gast. Gast took several students to contests across the region as practice for district FFA contest. Scores were tallied to determine the top four students that qualified for districts. The team won districts and advanced to the state contest in April 2014.

The team placed 2nd at state, just eight points shy of winning. But they qualified for the National Western Roundup in Denver, where they competed in January 2015 under Coach Tonya St. John. The team also qualified for the 4-H state contest September 2014, judging under 4-H Coach Marty Miller. There, they won the senior division and qualified for the North American International Livestock Expo in Louisville.

“Wherever we went, we tried to do our best. We prided ourselves in working hard and practicing our reasons the day before,” said St. John.

The team traveled and practiced with area junior college teams. “Listening to college teams and coaches broadened our horizon and knowledge base,” St. John said. “We went to local workouts and traveled a little bit to judge classes. Once we got [to Denver] we were very successful.”

“It was our goal to win a national contest. Our whole team is competitive and likes to win. We went in the contest with the mentality to try our best and do well,” said Farmer.

The team’s success landed them in 1st place at Denver and qualified them for the international contest in Edinburgh, Scotland.

“It was a very neat experience to work so hard all these years and finally be rewarded and recognized for that. It’s pretty awesome to hear your name called,” said Farmer.

In preparation for Scotland, judging workouts were more intense and the team developed more advanced reasons terminology. St. John said the atmosphere in Scotland was different because the kids judged in pairs rather than teams. Livestock species were limited to cattle and sheep, and the judging criteria were different. Farmer said they visited farms in Scotland before the contest to see livestock and learn what to evaluate.

“It was a shock at the awards ceremony. We felt really proud of ourselves to go that far and do well. We’ve had so much support from the community. It was really rewarding to represent Nevada, our community and the state over there. It was a whirlwind of emotions and truly a once-in-a-lifetime opportunity,” Farmer said.

“I’m so extremely proud of them. I couldn’t have asked for a better group of kids,” said St. John. “But I can’t take all the credit. Others helped the kids when they were younger. It’s a great feeling knowing you were part of something that big and that exciting.”