Written by Nancy Jorgensen on February 03 2016. 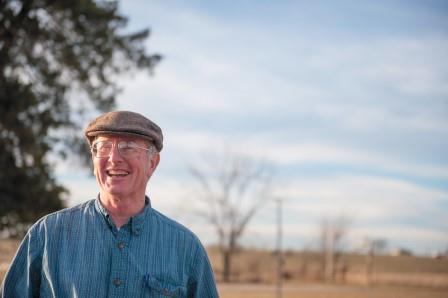 Mel Gerber loves growing wheat, and he thinks more farmers in Missouri could profit from it.

It may seem like he’s bucking a trend. In recent years, U.S. farmers planted fewer wheat acres, as wheat profitability declined compared to corn and soybeans. However, Gerber’s strategy of double cropping soft red winter wheat with soybeans gives him an edge.

“Wheat can be more difficult to manage than corn and soybeans, and that’s why few people around here grow wheat,” Gerber said. “I help other farmers grow wheat, and once they try it, it’s worth the effort because the wheat/soybean combination is profitable. Wheat has always been a stepchild in this state, but it responds to good management.”

Acre for acre, Gerber figures that by double-cropping wheat and soybeans, his income doubles over what he would make compared to single-cropping corn.

Gerber and his wife Mary do grow corn—700 acres of it, as well as 1,100 acres of soybeans. They doublecrop wheat with soybeans on another 600 acres, meaning they raise both crops on the same 600 acres in the same year.

Gerber usually plants wheat from Oct. 10 to Nov. 10, after soybeans have been harvested. He harvests wheat in June, which leaves time to plant soybeans again on the same ground.

“Almost everyone who grows small grains has to deal with this when you have heavy rainfall,” Gerber said. “In the past year, it’s been a major issue in central Missouri.”

Gerber purchases farm supplies at MFA Agri Services in Versailles. He also hires MFA agronomists to test his soil. He does his own field scouting for disease and pest issues and timing of applications.

When it’s time to take the grain to the elevator, MFA and other elevators test wheat for scab, and you can be docked for grain above a certain level. Often, the grain can be blended with other wheat to reach a level that’s safe for consumption, but deliveries with high levels can be turned away.

Flourmills conduct further testing. “Mills use optical sorters that kick out infected grain and reduce it by about 50 percent,” Gerber reported. European markets increasingly examine each kernel with infrared light, and Gerber predicts the U.S. will adopt this technique.

Other diseases that concern wheat growers include soil-borne viruses, and Gerber suggests that you use seed that resists them. Insects can transmit viruses, but most insects in wheat can be addressed with pesticides, Gerber said, as long as you choose a pesticide that works for the situation.

While some wheat growers let cattle feed on winter wheat during cold months, few Missourians use this practice. “It does a lot of damage if you’re looking for high yield,” Gerber said.

Besides profitability, Gerber also sees another benefit to growing wheat. “More people are planting cover crops to keep soil from eroding, and wheat is a good cover crop,” he said, adding that his clay soil drains poorly. “Soil’s fragile here, and conservation’s important to me.”

Gerber believes that ongoing research will improve wheat yield. “Wheat breeding has fallen behind soybean research, so there’s a lot of room to improve,” he said. “I’m convinced we can go beyond the yield we typically see in the U.S.”

In MFA’s trade territory, hard red winter wheat is mostly grown in Kansas, while soft red winter wheat is the main choice in Missouri. No matter which type you grow, Jason Worthington, agronomist at MFA Incorporated, offers tips on how to keep your wheat healthy.

What can I do now in the spring to improve yield?
Scout wheat for weeds, insects and diseases, and to determine how well it made it through the winter. Count tillers (lateral branches) to determine if you should apply early nitrogen to induce tillering, as more productive tillers lead to better yield. Nitrogen application can help until the boot stage in late April, when the fully developed head can be easily seen in the swollen section of the leaf sheath. Ideally, apply one-third of your spring N as a topdress before green-up if added tillering needs to be induced. Apply the remaining two-thirds after jointing begins. If no further tillering is needed, apply all spring N after jointing. Topdress the majority of your N and sulfur, and consider two field applications of N. Always fertilize based on soil tests and prior yield data or yield goals.

How important is scouting to successful wheat?
I find that growers do not commonly devote as much attention to their wheat as they do other crops. Wheat may respond better to an intensive management system that a crop consultant can help implement. Thorough and frequent field inspections are critical, because the timing of fertilizer, pesticide and fungicide applications pays dividends. Checking pest and disease levels, hitting the right growth stage, and applying the right product can be more accurate when a professional walks the field regularly.

What’s the greatest concern for wheat disease?
Fusarium head blight (head scab) has been the greatest concern over the past year. This fungus can be borne in seed or soil, which is why we highly recommend fungicide seed treatments. However, it can infect flowering wheat heads as well. While flowering, glumes that cover reproductive parts of the flower open to allow for pollination. During this time, rain can splash head scab spores into the glumes, making wheat vulnerable. The flowering pattern of wheat also makes complete control with fungicide difficult. Head scab fungicides are not systemic—they must cover the part of the plant they’re designed to protect. You must apply fungicide during flowering when glumes are open, before infection occurs. Typically, no more than 20 to 30 percent of the wheat head flowers at one time, giving you a three- to five-day window for treatment. Regardless of when you spray, you can’t protect the entire head, but spraying remains valuable—a 30 percent reduction in head scab still increases yield and grain quality.

How do head scab fungicides help ensure grain quality?
When head scab attacks developing kernels, it leaves behind a shrunken pink berry or an empty glume called a tombstone. Tombstones lower yield, reduce grain quality and often contain high levels of mycotoxin that elevators must screen. Fungicide treatment can reduce dockage at the elevator or prevent a load from being rejected. During the 2015 harvest, even well-timed fungicide treatments weren’t always enough, as tombstone scab and mycotoxin levels ran high.

What other diseases have we been seeing?
We saw several other fungal diseases, but rust was a major concern over the last year. Rust does most of its damage by attacking leaf tissue, which reduces the plant’s ability to photosynthesize energy and convert it to grain. Stripe and leaf rust are fairly easy to control by applying fungicides to wheat before infection becomes severe and after the wheat’s flag leaf emerges. When left uncontrolled, yield losses can be severe.

How can we defeat bugs?
I always recommend a seed-applied insecticide in wheat. Aphids and armyworms are the biggest problems. You can control aphids through seed treatment as well as foliarly applied insecticides. Aphids usually do the most damage by infecting wheat with the Barley Yellow Dwarf Virus; as few as one aphid per foot of row can cause enough damage to justify treatment. Armyworms move in after moths lay eggs in developing fields and worms hatch. They also migrate into fields like an invading army—hence their name. Scout for these destructive leaf feeders frequently. If levels are high enough, control them with a foliar insecticide. Hessian fly infestations can also be a concern, but planting after a killing freeze greatly reduces its likelihood. Resistance traits in wheat can also control a small number of insects on a limited basis.

What about controlling weeds?
Several herbicides can be effective, depending on the weed species and timing of application—just like with any other crop. However, fall-applied herbicides in wheat are under-utilized.

What advice can you share on seed selection for this fall?
My top bit of advice for growing healthy wheat is to start by selecting certified, treated seed designed to tolerate the challenges that you face in your area. Look for seed varieties with high yield potential as well as traits that make the plant resistant to diseases including rust, tan spot, septoria, fusarium head blight and viruses. Buy certified seed that has been rigorously cleaned to reduce the number of shriveled kernels—these are more likely to be infected with diseases such as head scab. Certified seed also helps ensure all seeds are viable. A lot of farmers save wheat in their bins to plant, but this seed may have a low germination rate, is likely not thoroughly cleaned, and could carry higher levels of seed-born diseases.