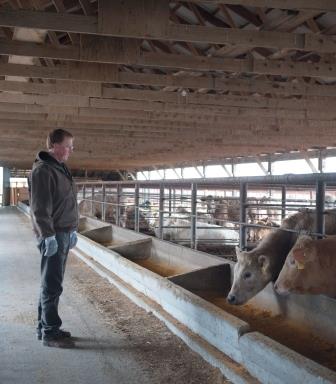 Dr. Tony Martin, staff veterinarian for MFA Incorporated in Columbia, Mo., says anaplasmosis is nothing new. But in 2014-15, he fielded more questions about the disease. He heard of clinical cases earlier than normal, and received a number of reports of dead cows testing positive for the disease.

Dr. Gregg Hanzlicek, director of production animal field investigations at the Kansas State Veterinary Diagnostic Laboratory, saw more Kansas counties with cattle testing positive for anaplasmosis in 2015 compared to previous years—especially in eastern and central Kansas. His lab tracks cases on its website, and the map reveals that more cases are being discovered in western Kansas (ksvdl.org; click on the Disease Trend button).

“Local vets called me saying they were seeing dead adult cows in pastures—even bulls—which is really unusual,” Hanzlicek said. “Some larger herds had from seven to nine dead animals.”

As Hanzlicek explained, if the cattle producer asks a local veterinarian to conduct a necropsy (akin to an autopsy on humans), the vet usually sends a sample to the state veterinarian laboratory asking for an anaplasmosis test.

Martin speculates that wet weather in Missouri in 2015 may have increased the number of ticks and flies spreading the disease. “External parasite concerns occur every year for livestock producers,” he said. “Years with good moisture and humidity make for larger, heartier populations of the insects that are harder to control.”

Hanzlicek reports that Kansas may not have been wetter than usual in 2015, but he thinks any increase in the disease may tie to a spurt in cattle coming into the state from drought-stricken places like Oklahoma and Texas in recent years. The disease has been found in every state except Hawaii, but is endemic to western Missouri, southeastern Kansas and parts of Montana and Idaho, he added. It strikes dairy as well as beef herds, but normally doesn’t affect other livestock in the U.S.

Both veterinarians also point to increasing awareness as a possible cause for what appears to be a rise in reported cases. Extension experts are educating producers about the problem in meetings, and producer publications are covering it. The high price of cattle may also be prompting producers to take more notice when they lose cows.

No one knows how many cows have died from anaplasmosis. “Many die from the disease without any diagnostic effort being made,” Martin said. “A lot of deaths, especially if it’s only one or two per herd, may go totally undiagnosed and are assumed to be normal losses.”

What are the symptoms?

Martin and Hanzlicek say you should watch for these early signs of the disease in cows:

Martin offered a scientific description of what’s happening. “The disease is caused by a blood-borne parasitic organism that attaches to red blood cells and leads to their destruction. Red blood cells are destroyed faster than the animal can create new ones, and the blood can carry less oxygen.”

Even the most docile bull or cow can become dangerous when infected, Hanzlicek warned. “I’ve had to run from infected animals several times. They’re basically anemic; their brains are starved for oxygen and, therefore, they don’t function correctly.”

Hanzlicek said animals of any age can be infected, but you rarely see clinical signs except in animals at least two or three years of age. He warned that even if the animal recovers, it will carry the disease for life but will never again show symptoms—these are the carriers and the sources of infection for uninfected animals in the herd. This means that as blood is carried from the infected animal to others, the disease continues to spread. Anaplasmosis spreads only through blood.

How can you fight it?

Feed antibiotics. Martin’s top recommendation: “To aid in the control of an active anaplasmosis infection, Tetracycline is often fed continuously, at the label-approved dose, from shortly before the insect vector season starts until after the first killing frost when insect populations die off.”

Provide good nutrition. Martin emphasized that it takes an intact, strong immune system, supported by good nutrition and a good body condition score to fight off diseases like anaplasmosis and to make use of antibiotics to effectively control and prevent the disease.

Avoid transferring the disease yourself. Both veterinarians warn against reusing injection needles. Make sure you properly disinfect tattoo pliers as well as castration and dehorning equipment.

Test cows when adding to your herd. Blood tests are available for farmers to diagnose anaplasmosis carriers. Hanzlicek says you must quarantine new animals for 30 days while waiting for test results from the state veterinary diagnostic lab. “Producers need to be sure of the health status of any new herd additions,” Martin said, adding you should include your local veterinarian in the discussions.

Call your local vet when you find a dead animal. “The animal may have died from other diseases,” Hanzlicek said. “You need to find out the cause so you can prevent future problems.”

Consider using the vaccine. Developed and manufactured at Louisiana State University, the anaplasmosis vaccine has been approved in Kansas, Missouri and other states for use by veterinarians. Hanzlicek hears most stories about dangerous animals when ranchers bring animals in from the pasture to administer the vaccine. “Cattle become stressed when moved and they can die on the way in,” he said, “Move them slowly.” Some vets don’t even recommend treating, as moving cattle to the administration site may cause more problems than the disease—and most animals will recover on their own, he added.

When and how can parasites affect your herd?

Hanzlicek reported that the disease takes on average 28 days to incubate, so you typically won’t hear about cases until late summer or early fall.

“Cases are typically more prevalent in fall and winter as the nutritional quality of grazed forages decline, body condition slips a little, and, too often, use of Tetracycline is stopped too soon,” Martin explained.

Opinions vary about the cost of the disease. Martin and Hanzlicek have seen estimates showing the cost of treatment at more than $400 per animal. “An even greater cost most likely comes from effects that can reduce reproductive success, decrease milk production, or increase culling and death rates,” Martin said. With cow and bull prices reaching thousands of dollars, the cost of dead animals runs pretty high.

Beyond external parasites, other major pests that affect cattle in our area include internal parasites such as worms, coccidian and, occasionally, flukes, Martin concluded. In the winter, when animals spend more time close together, lice prevention and control come into play.

Contact your local MFA-affiliated Agri Services and AGChoice locations for additional information on products and procedures to control pests.