Her life is devoted to taking care of others, humans and animals alike. She’s a mother of three, labor-and-delivery nurse, lactation consultant, farm wife and cattle producer.

It’s a business born from a mother’s love.

“My son, Samuel, is the whole reason I formed Morning Glory Farms,” Tiffanie said. “When he was about 7 years old, he started complaining of terrible stomach­aches. He wasn’t growing like he should, and he also had extreme anxiety. I really dug into nutrition to figure out what was going on with him, and we found out he had severe allergies to gluten and dairy. It’s not celiac disease, but he can’t tolerate gluten at all. I made it my mission to change our diet to help him get better.”

Those changes started on the Weekley farm, where Tiffanie and her husband of 24 years, Tim, produce beef as part of their diver­sified row-crop and cattle operation. Tim is the fifth generation to work the land that’s been in the family since 1865, and his father, Douglas, still works part time alongside his son. In addition to Samuel, Tim and Tiffanie have two daughters, Kaitlen, 19, and Allison, 21, whose husband, Justin Griffin, also farms with the family.

Before she got married and completed nurs­ing school, Tiffanie had studied animal science for a short time at the University of Missouri. Using that background along with her medical knowledge and help from a registered dieti­cian, the determined mother began researching ways to improve her family’s health through the food they ate. That research led right to her own backyard—more specifically, her pastures.

“We decided we needed to change the way our animals were fed to limit the exposure to what we were ingesting,” Tiffanie said. “We transitioned them to a more natural, pas­ture-based diet along with hay and grain we raise on the farm and custom supplement from our local MFA for their final ration.”

With changes in their farm-raised beef along with other dietary modifications, the Week­leys began noticing positive results in Samuel. Tiffanie attributes the difference to an improve­ment in his gut health, which plays a critical role in shaping appetite, allergies, metabolism and neurological function.

“It didn’t happen overnight, but Samuel is doing outstanding now,” she said. “He’s 15 and growing like a weed. He has fewer illnesses and his anxiety has lessened. In fact, we all saw our health changing for the better. Our gut affects our immunity and our mental state and many other processes in our body. Keep the gut healthy, and every­thing else kind of falls into place.”

Her family’s health journey inspired the idea for Morning Glory Farms, and the business took root when Tiffanie joined the family operation full time in 2017 after one of Tim’s em­ployees took another job.

“That left us empty-handed,” Tiffanie said. “I quit my full-time nursing job and came back to the farm. I had been talking to other people about what we were doing with our cattle, and the demand for pasture-raised, grain-finished beef was catch­ing on. So, I decided to start my own business and help other families improve their health through the food they eat. My two passions were colliding. I love the nutrition side of things, and I love the animals. It was a great fit for me.”

Maintaining a part-time schedule as a lactation consultant, Tiffanie took over the family’s existing cattle operation and began building a herd for Morning Glory Farms, a name that reflects her strong Christian faith. It’s based on Exodus 16:7, “In the morning, you shall see the glory of the Lord.” She now man­ages a total of 80 cows—40 belonging to Weekley Farms and 40 owned by Morning Glory Farms. Tim admits he was more than happy to turn over the livestock reins to his wife.

“She’s the cattle girl; I like row crops,” Tim said. “She nurtures them like she would kids, and she has the patience that I don’t. It’s worked out pretty well. I just fill in the gaps whenever I’m asked to help.”

Cattle need proper gut health, just like humans, Tiffanie said, which is why her feeding program is focused on forages. However, she also knows that grain-based diets help improve marbling and flavor in the beef.

“Cattle were made to be on pasture, so we help keep their guts healthy by keeping them on grass,” Tiffanie explained. “But if you want a good steak, you also need to feed them grain. Our beef gives you the health benefits right along with the flavor.”

Her bone broth, also known as beef stock, provides other health benefits that can’t be derived from eating meat alone. It’s made from cooking beef marrow bones and connective tissue in a long, slow process that extracts collagen and other beneficial nutrients. Every batch takes 48 to 72 hours to cook. Tiffanie hand-crafts the broth in the Weekley family kitchen and freezes it in 24-ounce and 8-ounce containers for sale.

“Bone broth is rich in collagen, protein and nutrients, which helps the gut heal,” Tiffanie said. “I’ve been making it for Sam­uel for years, and he loves it, so I decided to try marketing it along with my beef. I’m not so much interested in the monetary benefits as I would love to see people be healthier with pre­ventative care. Plus, it’s another way for us to respect the whole animal by using as much of it as we can.”

Direct-marketing the beef and broth has been a welcomed diversification to the family’s otherwise traditional farming oper­ation, Tim said. He raises some 3,500 acres of corn, soybeans, rye and wheat and helps Tiffanie maintain 400 acres of pasture and hay ground. The Weekleys participate in MFA’s Crop-Trak scouting service and Nutri-Track precision program and rely on Heart of Missouri Agri Services for most of their farm inputs.

“The future of this farm depends on how many family mem­bers want to come back, so we have to make sure we diversify and expand,” Tim said. “The farm-to-table business is compet­itive, but I think there’s room for everybody. People want to know where their food is coming from, and health is getting to be a big issue. I think what Tiffanie is doing with her bone broth will help set her apart in that crowd.”

Marketing her farm products beyond friends and family has been one of the biggest challenges, Tiffanie said. She’s devel­oped a loyal, local clientele for her bone broth, and her beef can now be found at Hy-Vee in Columbia, the Blackwater Country Store and several restaurants in Kansas City, about an hour and a half away from the farm.

“Tim farms organically for one of his landlords, and through those connections in organic food circles, I was introduced to a few chefs in Kansas City,” Tiffanie said. “I made it my mission to go into these different restaurants and form a relationship with the chefs. It’s been the neatest experience to see that side of the food business.”

One of those chefs is Michael Foust, owner of The Farmhouse restaurant and Black Sheep + Market. He opened The Farm­house in 2009 in the eclectic River Market district of Kansas City and has been working with Missouri and Kansas farmers from Day 1 to supply fresh ingredients for an ever-changing sea­sonal menu. Black Sheep opened in 2018, following the chef’s farm-to-table tradition plus a fresh market where products such as Morning Glory Farms beef can be purchased.

“Over the past 10 years, we’ve worked with some incredible farmers,” Michael said. “We started working with Tiffanie earlier last year, and she’s come into the fold as one of our full-time suppliers. She’s certainly producing a quality product, but we look at the bigger picture. We also look at the animal husband­ry, how the animals are treated on the farm and whether this is something that’s sustainable. We want to not only make sure the animals are doing well, but also that the farmers are doing well. They’re our partners, so it’s just like family.”

Speaking of family, Tiffanie said her daughters are interested in getting more involved with the business in the future. Kaitlen is studying to be a dietician, and Allison is earning a degree in psychology. Their education fits well with the mission of Morning Glory Farms to improve the lives of its customers, Tiffanie said.

“I think this journey helped form their opinions about what field to go into,” she said. “The kids can be so involved with this whole process, and that’s another reason why I wanted to do something like this. I want them to have a job to fall back on if they need it, and I want my grandkids to be underfoot someday.”

Tiffanie said she’s taking “baby steps” as she grows her enter­prises, careful not to compromise the care of her animals, the quality of her products or her time with family. Her immediate goal is to expand the broth business with wider distribution.

“Bottling broth is really on my radar right now,” Tiffanie said. “I’d love get into more of the nutritional aspect, because that’s where my passion lies. I’m actually talking with someone who is getting ready to build a bottling line for his own business, and I’m looking into whether the state of Missouri has grants for a project like that.”

Though juggling her roles as a wife, mother, business owner, part-time nurse and full-time farmer can be quite challenging, Tiffanie said she wants to set a good example for her children and for other women who have a dream they want to pursue.

“Even though I’m busier than ever, I love what I’m doing,” she said. “I love the autonomy of it, and I love showing that you can achieve whatever you set your mind to. You just have to reach for your goals.” 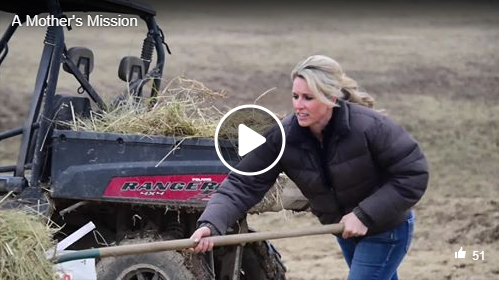