A little help for my friends 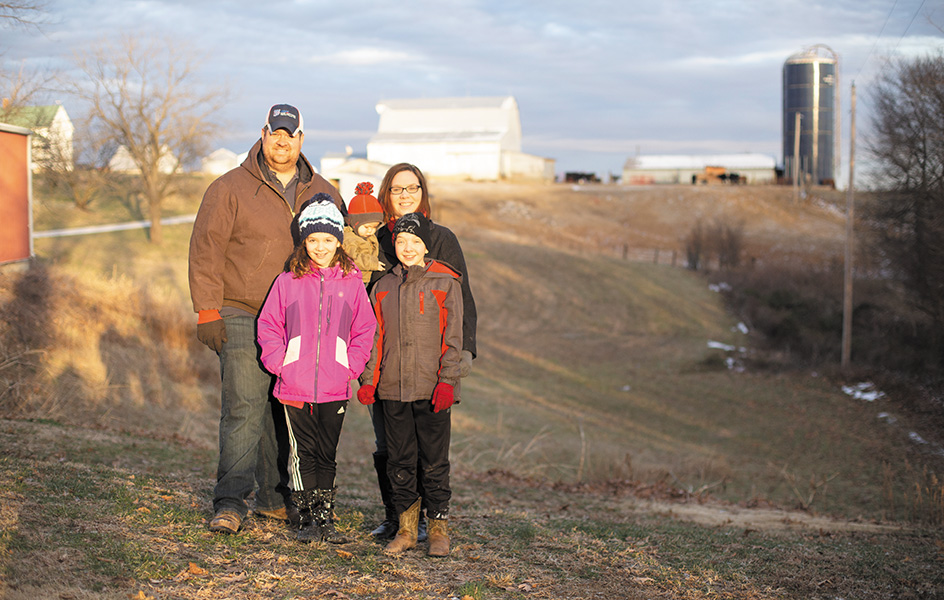 John and Jennifer Fritsche of Perryville, Mo., serve their community on various local boards—including MFA—and their son, Lucas, is quickly following in their footsteps. Roughly three years ago, the youngster proposed the idea of an all-inclusive playground for his community. Soon, his idea may come to fruition. Pictured from left in back are John and Jennifer, holding 10-month-old Landon. In front are Halie, 8, and Lucas, 11.When Lucas Fritsche was 8 years old, he noticed one of his friends in a wheelchair would come outside during recess but wouldn’t stay long. Some days the friend even pre­ferred to stay inside.

When Lucas asked him why, the fellow third-grader told him it was difficult to get onto the playground and into a swing to play.

“Lucas’ feelings were hurt, and he was saddened that his friend couldn’t play outside with him,” said Jennifer Fritsche, Lucas’ mother. “He started talking to us about how he wanted to build a playground where everyone could play. We ex­plained to him that takes a lot of money and it’s not something that you can just do, but Lucas was persistent.”

“It’s not fair that he can’t play outside with us,” Lucas told his parents. Jennifer and her husband, John, have two other children, Halie, 8, and Landon, 10 months, and live in Per­ryville, Mo., on the farm that has been in the Fritsche family since 1892. John grows 400 acres of corn, wheat and soy­beans every year, helps his father with another 500 acres and raises 40 cow/calf pairs. He also serves on his local MFA board and church council. Jennifer works in accounting for a large construction company.

Soon after their conversation, Jennifer received a call from the principal at Perryville Elementary School. Unbeknownst to her, Lucas had also been talking to his teachers about the idea. The principal suggested speaking to one of the school’s parent groups to see if they could raise funds to improve the playground.

Lucas, who has been diagnosed with high-functioning au­tism, did his homework. Back at school, standing in front of a darkened classroom with a PowerPoint presentation his mom helped him create, Lucas began his pitch to the parent group.

“Some of my friends only get limited time on the play­ground. If they are in wheelchairs, they need more help entering the playground,” he started, reading from note cards with a little help from Mom on the trickier words.

“Does anybody have any questions?” he asked, concluding the presentation.

With support from parents, Perryville passed a bond mea­sure that allocated money for school improvements, including upgrading playgrounds. Word had spread of Lucas’ idea.

“Coincidentally, I serve on the disability development board for Perry County with the mayor,” Jennifer said. “We were sitting around talking about Lucas’ presentation at one of our meetings, and he told me if we could raise the money, we could pick any of the available city land to build an all-inclu­sive playground from scratch.”

From there, the Fritsches and the Fun For All Committee embarked on a grander plan—Lucas and Friends Backyard Adventures—a playground for everyone.

Since his first presentation, Lucas has done several televi­sion and newspaper interviews. The kind-hearted youngster has posed for photos, been the front man for fundraising events and accepted checks for up to $100,000.

“You can put him anywhere, and he’ll talk about the play­ground,” Jennifer said.

And little by little, with dances, bake sales, movie nights, prize giveaways, and in-kind donations, they’ve raised close to another $250,000.

The Fritsches are work­ing with Unlimited Play in St. Charles, Mo., and Little Tikes equipment to design the playground. The layout includes a merry-go-round that is flush with the ground to allow wheelchair accessibility, high-back and generation swings, spongy surfaces, a tree house structure with ramps, musi­cal elements and more. 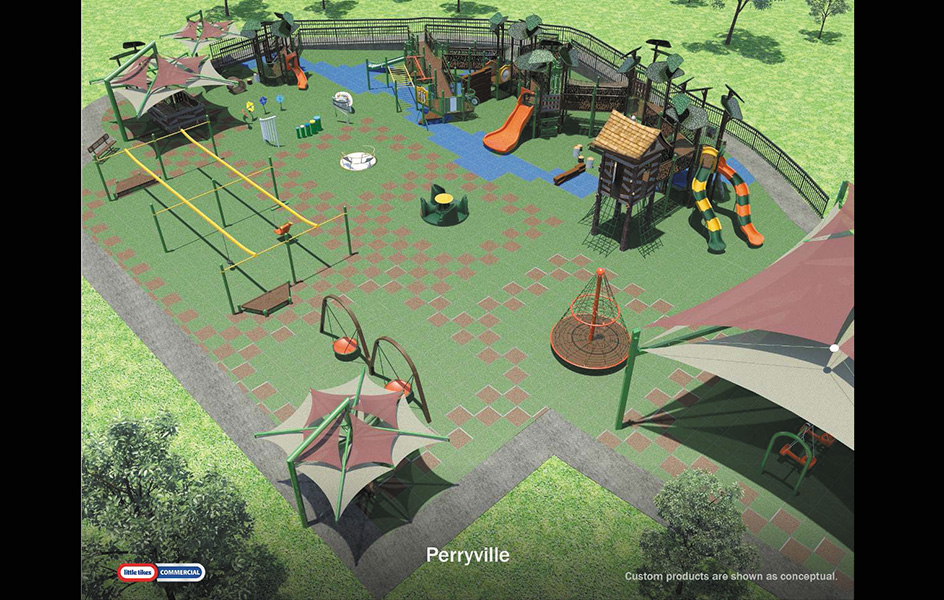 The Fritsches are working with Unlimited Play in St. Charles, Mo., to design the Lucas and Friends Backyard Adventures playground. They hope to break ground in late spring or early summer.“The whole concept behind these playgrounds is parallel play,” Jennifer said. “Kids with disabilities will play side-by-side with other kids. It’s designed to be super fun for everyone, so there’s no difference.”

It will take close to $1 million to complete the full design. About 20 percent to their goal, the Fritsches plan to build incre­mentally by adding different portions of the playground as funds become available. They’re hoping to break ground in late spring or early summer of this year on the selected site at Robert J. Miget Memorial Park in Perryville.

“We want to get started so people know this isn’t just talk,” Jennifer said. “We’re really going to do this.”

Lucas, now 11, said his favorite pieces of equipment in the playground design are zip lines with high-back chairs and the tree house, which will provide ample shade, ramps for alternate entry and specialized handrails.

“The tree house is custom-made for this playground,” Jennifer said. “It even has a hammock underneath for therapists to come and work with the kids. We had a public forum on what aspects people would like to see in the playground, so the community has really been a big part of this.”

But more than the equipment, Lucas said the best part is that there will be a place for everyone on this playground.

“I’m most excited to see all the kids play together and nobody being left out,” Lucas said.

For more information on Lucas and Friends Backyard Adven­tures, visit facebook.com/lucasandfriendsplayground/. Contri­butions can be made online at unlimitedplay.org/playground/lucas-friends-backyard-adventures/. Click the donate button on the right side of the page.