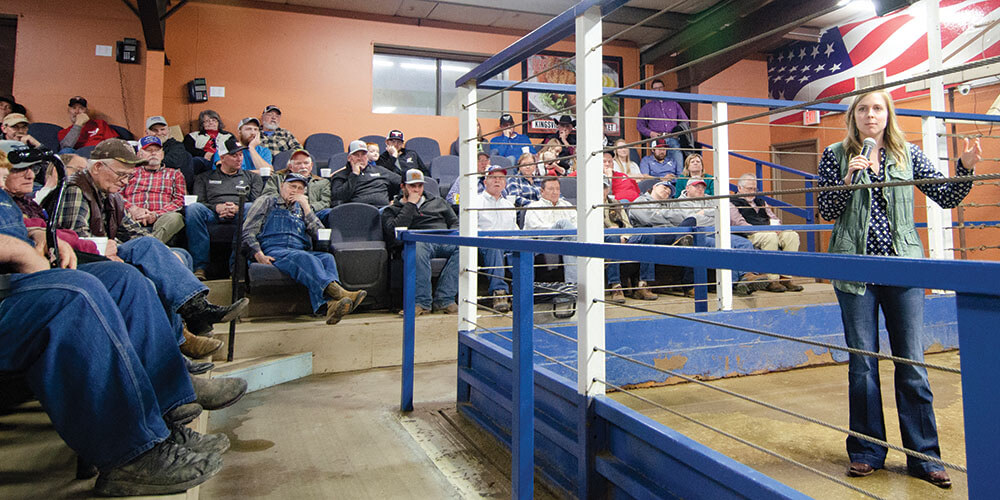 Animal traceability is a difficult subject to discuss, let alone tackle, in the cattle industry for many reasons—both real and imagined. Objections to any comprehensive beef animal tracking range from liability to privacy concerns to potential negative effects on free markets. 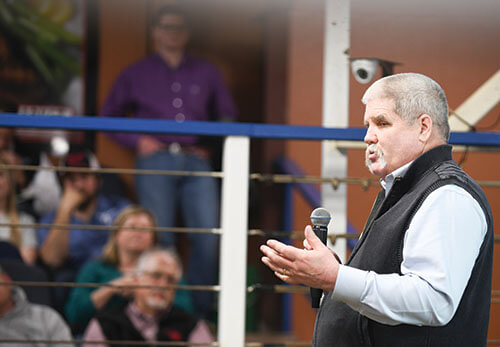 Kansas Animal Health Commissioner Dr. Justin Smith spoke to the Missouri crowd about the current challenges he faces while tracking down reportable animal diseases like tuberculosis in his home state. “Today, the challenge is knowing where to look,” said Smith, the state’s top vet. Those involved in building health traceability systems rec­ognize those challenges. That’s why a new pilot program called “CattleTrace” is intentionally being built from scratch with a very limited scope—developing an infrastructure for reportable animal disease traceability. MFA Health Track recently joined this public-private partnership to create a more effective beef cattle disease response tracking system.

“CattleTrace is designed strictly for the event of animal disease outbreaks,” said Cassie Kniebel, CattleTrace program manager. “Really, it is going to be for the use of animal health officials like state veterinarians.”

Currently, she explained, state veterinarians do most of the investigations of USDA-reportable diseases such as brucellosis and tuberculosis, and their investigations are often slowed by paperwork and dead ends.

So, how does an industry trace its own calf locations? It turns out only four data points have to be collected to effectively track down sick animals. The CattleTrace project is testing the viabili­ty of collecting only the animal ID number, time, date and location. The process occurs when a beef animal wearing an ultra high frequency (UHF) tag passes a tag reader and is recorded as being present at a certain spot at that date and time. This is called a sighting, a term used in other databases to track beef and dairy cows that cross state lines. Sightings make it possible to re-create a path that a sick animal took and reduce the spread of the disease.

“Today, the challenge is knowing where to look,” said Kansas Animal Health Commissioner Dr. Justin Smith, the state’s top vet whose job is to track down the origin of sick animals in Kansas. He had just spent the previous week with his team testing cows for tuberculosis in western Kansas. “With CattleTrace, we’ll know right away where to look and who to ask. Since, most of the time, producers and markets are doing things the way they are supposed to, investigations go pretty quickly, but that is once you know who to ask and where to look.”

In an example given for tuberculosis, animals need to be tested for five years after being exposed. If producers don’t have good records on who they sold a cow to five years ago, that animal is difficult to track.

“The faster we can track down sick animals, and the better the records, the fewer animals need to be quarantined and tested,” Smith said.

The traces currently completed for sick cows are made possible from the calfhood vaccinations required for heifers and health papers required to travel across state lines. This data populates existing databases to track beef and dairy cows. However, these databases do not track steers and heifers under the age of 18 months.

Tracking beef calves can be difficult because they are usually harvested by 30 months of age and are moved around a lot. No single database currently exists to track young animals. CattleTrace could help solve this problem. 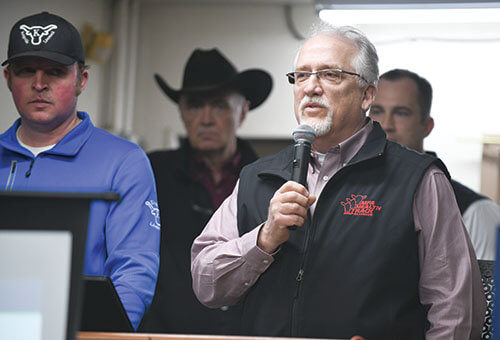 Speaking at the Kingsville Livestock Auction about MFA’s involvement with CattleTrace, Health Track Director Mike John said, “We are proud to lend our expertise to this industry-led effort.”

In the case of foot-and-mouth disease (aka hoof-and-mouth), considered the most contagious pathogen second only to small pox, the speed at finding animals will be critical, Smith said.

“It takes a very low viral load to infect with foot-and-mouth,” he said. “It also affects all of the cloven-hooved species.”

Foot-and-mouth has only a seven-day to 14-day incubation period, during which animals can be spreading the disease, possibly not yet showing symptoms. In extreme situa­tions, the disease has been suspected to be spread by wildlife or even windblown.

“Every state is different, but in the case of a livestock foot-and-mouth outbreak in Kansas, I’d order an all-stop on movement of livestock in the state,” said Smith. “No livestock would be allowed to be transported anywhere until the problem is contained. You have to assume every animal is affected until ruled out. Although the disease doesn’t affect humans, it is nasty because animals are never really the same afterwards.”

Having a system like CattleTrace up and going could also help animal health authorities effectively clear herds and entire areas that were not exposed to the sickness, added Mike John, director of MFA Incorpo­rated’s Health Track program.

“As a producer, that is why I am participating,” he said. “They might be the impartial third-party that says, ‘This herd is good.’ That could help reduce the economic impact of even the most severe outbreak.”

Not just in Kansas anymore 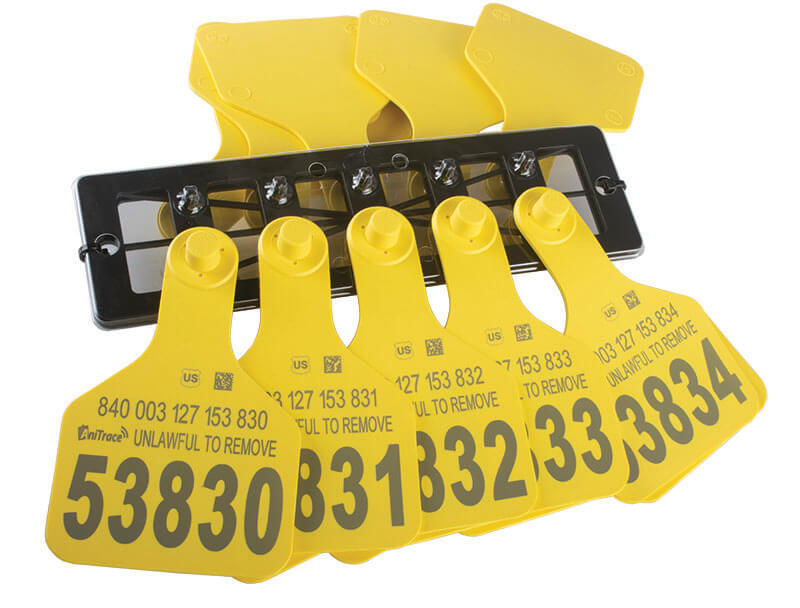 Ultra High Frequency Tags used by Cattle Trace This pilot program is steadily growing into multiple states with the goal of becoming a national asset. In Kansas, Cattle­Trace has UHF readers installed at eight livestock markets, 14 feed yards, four packing plants and enough ranches to start testing the database. The Missouri and Kansas Departments of Agriculture have signed a statement of cooperation to work with each other in the project.

The CattleTrace system is set up as a not-for-profit with a five-member board consisting of cattle industry representatives. CattleTrace also has an advisory committee made up of members of the Kansas Livestock Association, Kansas State University and Kansas Department of Agricul­ture. The project is partially funded by a USDA grant distributed through K-State.

In Missouri, CattleTrace was presented to producers who met over ribeye meals in March at the Kingsville Livestock Auction, the first location in the state to participate by installing UHF tag readers. Many of the producers were interested in the new tag technology that is making the pilot possible, although some were skeptical and asked pointed questions about the process.

What they learned was that the program inves­tigators will not have direct access to the per­sonal data from producers. Instead, they request information through queries from an animal ID tag. The next phase is continuing growth of the database and participants by adding states and producers and then conducting database testing.

“The exact protocol for requesting data is still in the works because that is it part of what the pilot is determining,” Kniebel said. “Right now, we are in data-collection mode and writing the database queries. We will start to mock traces this summer.”

As director of the MFA’s Health Track preconditioning verification program, John said he is interested in helping the Cattle­Trace pilot program for several reasons.

“This new UHF tag technology can do what low-range RFID tags cannot,” he said. “You have to be within inches to read cur­rent tags, making it difficult to use for man­agement. It requires you move cattle single file. The options are limitless with the new tags, which could even allow in-the-pasture data and animal behavior reading.”

Second, John said, MFA Health Track wants to have a voice in the way the data is used and protected.

“We are proud to lend our expertise to this industry-led effort,” John said. “That is why Health Track customers who want to participate can opt-in. They just have to use the different UHF tags also issued by MFA Health Track.”

Above all, he said, the livestock indus­try needs a fast and accurate response to a health crisis, especially one that challenges producers’ livelihood.

“I’d prefer it be solved by the industry, instead of legislators,” John said. “Our customers are starting to insist. I believe it makes sense to do it while beef consumers seem to be willing to pay a premium to know more about their food and its origin.”

For more information, visit CattleTrace.org, beefusa.org/traceabilitystudy1.aspx and mfahealthtrack.com.
To hear a recording of the Kingsville Livestock Auction presentation, visit https://mfa.ag/CattleTraceKingsville.

To view the story as printed CLICK HERE for the flip book version of the May Today's Farmer Magazine.