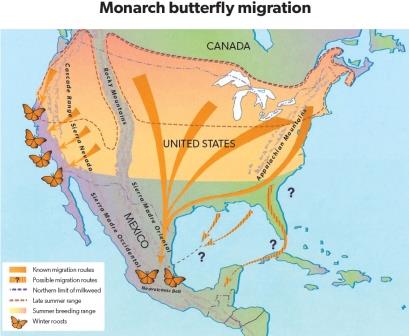 It might surprise you to find me writing about monarch butterflies in this space. But I am. There has been a significant decline in the monarch population over the past few years. It is easy to point fingers to others, but it is time to admit that a shrinking habitat is likely the cause of monarch decline.

Monarch butterflies overwinter in central Mexico during the area’s dry season, which is right about now. Increased illegal logging in central Mexico has reduced the monarch’s overwintering habitat, but that is not the sole cause for its decline. The rapid adoption of non-selective weed control programs has reduced the amount of habitat in the butterfly’s summer breeding grounds. This is a factor in which our trade territory plays a vital part.

As a weed scientist, talking about planting milkweed goes against what I have done in the past. Milkweed has been considered a pest to most of agriculture, and we have sought to control or eradicate milkweed from our farms. Of course, I am not saying we need to totally upend weed management. However, there are some things that you and I can do to help make sure the monarch butterfly doesn’t get listed as an endangered species, or worse, go extinct.

Yes, it will involve planting milkweed. This isn’t the only thing the monarch needs in order to rebound, but it will play a key role.

As I look at the Midwest and see acres of CRP, community gardens, state and federal parks and our spacious backyards, I see places that make ideal candidates for monarch habitat and foraging.

Timely mowing and herbicide applications can also help protect the monarch population. Try to avoid mowing this kind of habitat when the monarchs are using it. This will allow them to continue the life cycle and make the trek north or south.

Common milkweed, swamp milkweed, butterfly weed, and whorled milkweed would be the species of choice in our trade territory. There are numerous facts available on the following links that can help you establish habitat for monarchs and pollinators.