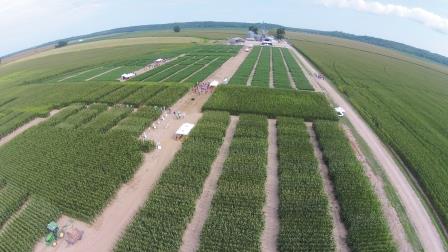 In-season nitrogen applications on corn and wheat have long been a part of Midwestern fertility programs. It is rare that wheat fields don’t receive a topdress application of nitrogen—if not two spring applications.

In-season topdressed nitrogen in corn is increasingly common whether it comes as a planned application or as a rescue application.

The perennial question that growers and applicators ask prior to the in-season topdress is how much nitrogen should be applied. That, of course, is the million-dollar question. If you answer it right, you get maximum yield for the input cost. If you answer it wrong, you either leave yield on the table or waste inputs.

We now have decades of experience in variable-rate fertilizer application. Through this experience and fine-tuning our abilities to collect yield data and soil test information, we have created very accurate recommendations for nutrients like phosphorus and potassium. Building an accurate variable-rate nitrogen recommendation has been more elusive. Improvements on variable-rate nitrogen are hitting the marketplace, however. Choices growers have right now basically come from one of three categories: machine-mounted crop sensors, aerial imagery or nitrogen models.

Once initial measurements are taken and application begins, the sensors continuously read the amount of light reflected. Application rates are calculated and adjusted on the fly by the computer and variable-rate controller on the machine. This process is very convenient due to the fact the applicator doesn’t need a recommendation built beforehand. The recommendation is built on the spot by the need of the plants. On the other hand, that means you won’t know how much nitrogen product is required until after application is completed, which can lead to challenges with product delivery.

Using aerial images to determine a variable-rate nitrogen recommendation on a field is similar to the principle behind on-the-go sensors. In this approach, the reflectivity of target plants is acquired by an aerial image to determine the topdress nitrogen rates throughout the field. The information can be measured in several different spectrums, but the theory is the same—crops with adequate nitrogen will be greener than those with inadequate nitrogen. The major difference between aerial and on-the-go measurements is that the aerial images can be turned into nitrogen recommendations before the applicator heads to the field, so the total amount of nitrogen is already known.

MFA is evaluating software that processes high-quality images captured from satellites, airplanes or even a grower’s drone to create in-season nitrogen recommendations. The processing time involved in building the recommendation is the challenge. Timing becomes an issue as well. Aerial images and crop sensors work best when the crop canopy is closed, which ensures reflected light is coming from leaves, not bare soil.

Nitrogen models work much differently than sensing technologies. Instead of taking a light reading to determine the nitrogen sufficiency of the crop at a specific point in time, nitrogen models attempt to measure the factors that affect nitrogen availability, loss, and a crop’s yield potential to create a nitrogen recommendation. The variables listed above are entered into the model or measured throughout the season to figure nitrogen loss and mineralization. The model’s goal is to predict nitrogen needs for the remainder of the season. This is advantageous from the standpoint that recommendations can be made with some added accuracy over typical flat-rate recommendations. However, if any information is left out or unaccounted for the accuracy of the nitrogen model will decrease. Where sensing or imaging technologies measure current conditions, models are working off of a lot of calculations and assumptions.

Regardless of the method used to develop more accurate in-season nitrogen recommendations, these new options should excite growers. The goal of variable-rate technology with nitrogen and other nutrients is to make sure the right rate is applied in the right place. This is good stewardship for the environment and leads to increases in agronomic productivity and cost efficiency of your inputs.