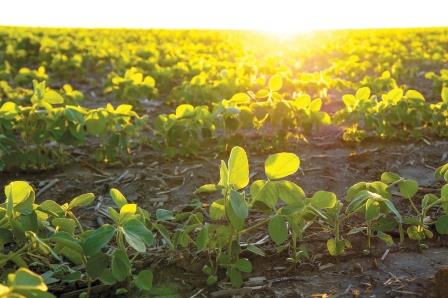 If you see something, say something. That’s the mantra for national security, but it can help in your soybean field, too. The early season disease damage you see in the field this year will have an effect on yield at the end of the season. And the fungus will likely be waiting for the next soybean crop, too.

Soybean seedling disease pressure is most common in cold, wet conditions, which are stressful on plants and give diseases a foothold. Compacted soils and heavy clay also tend to increase chances of fungal disease.

The canary-in-the-coal-mine to watch in spring are low-lying areas and wet spots where seedlings often are first to exhibit disease.

What to watch for:

Pythium seed decay and damping-off. Pythium is the most common fungus causing damping-off in soybean. It is more likely to occur on soybeans that are planted early in the season in colder soils. Infected plants have a rotted appearance and can easily be pulled from the soil.

Phytophthora seedling blight. Phytophthora is a soil-borne fungus that causes seed decay, pre- or post-emergence damping-off and seedling blight of soybeans. It is most common in soybeans planted in warm (greater than 65 degrees) and wet soils. The seedling blight phase may cause yellowing, wilting and death of the plant. It is more likely to occur in low-lying or poorly drained areas.

Rhizoctonia seedling blight. Rhizoctonia is another common soil-inhabiting fungus that can cause seed decay and pre-emergence damping-off of soybean seedlings. Symptoms of rhizoctonia are found on seedlings, young plants and even older plants and consist of localized red to reddish-brown lesions near the soil surface. Infected plants may be stunted or less vigorous than healthy plants, causing uneven stands. Severe infestations and dry weather may cause death of the plant. Like phytophthora, rhizoctonia prefers warmer soils.

Fusarium seedling blight. Fusarium seedling blight is caused by a soil-inhabiting fungus and causes weak or stunted plants and uneven stands. The disease causes a rot of the root system while the aboveground portion of the plants may start to turn yellow. Plants may eventually wilt and die during periods of warm to hot weather. The disease is most severe when the soil is saturated and soil temperature is around 57 degrees at planting, conditions that are not as common this year.

Charcoal rot. Charcoal rot is one of the most common diseases found in soybeans. It typically shows up as a mid- to late-season disease on mature soybeans, but can also occur early in the season on seedlings. Symptoms include reddish-brown discoloration from the soil up the stem that may become dark brown to black as the disease progresses. Plants may die if conditions become hot and dry.

There are several approaches to manage seedling disease. The notes you take this year will help you decide which management techniques will best suit the field the next time it is in soybeans.

Seed selection and seed treatments are the key tools. Obviously, you should select resistant or tolerant seed cultivars. Soybean seed lines have disease ratings for Phytophthora root rot (look for the PRR). Keep records of cultivars grown in order to track PRR races that may be present in the field.

But chemistry is only so powerful. Your crop scouting is important for future success. Seed treatment active ingredients should provide control of the pathogens you’ve noted in the field. And it is worth noting: active ingredients that control Pythium and Phytophthora diseases do not affect Rhizoctonia and Fusarium species. Similarly, fungicides that are active against Rhizoctonia and Fusarium have little effect on oomycetes. The University of Missouri has a useful guide on soybeans that includes photos to help identify diseases. Download it at: http://mfa.ag/Tu2SmCf.

If you have questions about diagnosing or treating soybean seedling disease in your fields or about replant decisions, contact your local MFA agronomist.