100 years later at the Newcomer Schoolhouse

MFA board members and descendants of the first MFA members gather to remember MFA’s origins. 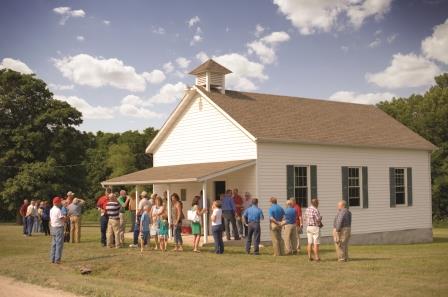 In the months leading up to March 10, 1914, MFA organizer William Hirth had stirred the hearts of many farmers with the new idea of farmers banding together to garner collective power in buying inputs and selling the fruits of the farm. It was in Chariton County in a one-room schoolhouse that the idea was formally realized.

On that March evening in 1914, members of the Newcomer Schoolhouse Farm Club gathered to make a bulk order of baling twine. Attending that historic meeting were: Aaron Bachtel, T.E. Penick, brothers W.J. and George Heisel, Earl Smutz, John Kohl and W.L. Armstrong. This meeting and the cooperative purchase launched MFA.

On July 22, 2014, MFA Incorporated’s board of directors along with MFA management and staff joined descendants of the Newcomer Schoolhouse Farm Club and local community members to pay tribute.